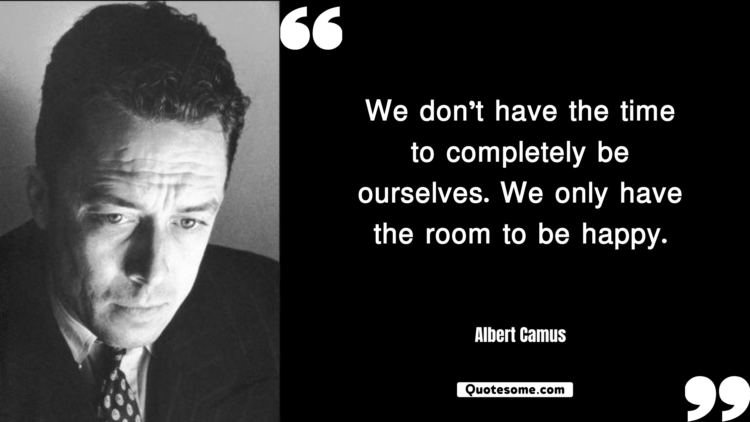 Albert Camus was born in Mondovi, French Algeria, on November 7, 1913, and died on January 4, 1960, in Burgundy, France. During the 1940’s he became known for his essays, novels, and political journalism. Some of his best-known works are exemplars of absurdism like The Plague (1947), Exile and the Kingdom (1957), The Fall (1956), and The Stranger (1942).  He never considered himself to be a philosophical ally of Sartre.

At that time, he bought a fresh perspective to the otherwise metropolitan French literature. Apart from writing novels, he even contributed to plays and was an active artist in the theatre from the 1940s to the 1950s. He was awarded the Nobel Prize for literature in 1957.

His works are dominant in absurdism but often associated with existentialism. The book which elucidates the theory of absurdism most directly is The Myth of Sisyphus (1942). The protagonists of The Plague (1947) and The Stranger (1942) have to face the cultural and social orthodox labels with dire results.

Interests evolve into hobbies or volunteer work, which grow into passions. It takes time, more time than anyone imagines. When you are very clear about your interests then you don’t have to bother about things that don’t interest you anymore. So it is very essential to know about your interests otherwise you will waste a wide span of your life wondering what you should do.

Blessed are the hearts that can bend; they shall never be broken.- Albert Camus

Non reaction is not weakness but strength. Non reaction in other words is forgiveness. And those hearts which can bend are not weak, they have the most resilient heart as they endure all the pain with a smile on a face. Those who bring sunshine to the life of others cannot keep it from themselves.

The only way to deal with an unfree world is to become so absolutely free that your very existence is an act of rebellion.- Albert Camus

When the world tries all mean to cage you, be a carefree bird and soar high, breaking all the bondage of slavery. We all are bondage slaves, acting on the command of the world. We fear to put out our own opinion, we are scared of living our dreams, we think twice before deciding for ourselves. Cause we all have an after success plan but we don’t have a backup for the failure. Maybe your carefree attitude seems an act of rebel to others but does it once to be guilt-free for yourself.

But in the end one needs more courage to live than to kill himself.- Albert Camus

We all have an inbuilt thought that committing suicide takes courage and simultaneously is the easiest thing to do. But in reality, living in this world takes more courage. We all are bonded to each other in some way or another. And to live with all the baggage of emotions, regrets, guilt’s, failures makes you an unsung warrior. Killing yourself is the easiest as you cut off all the ties and bonds and you become free. But living on withholding onto all the ties and bonds takes strength.

Man is the only creature who refuses to be what he is.- Albert Camus

Human beings are the only creature who refused to be known what they are. They keep on pretending to be the person, which they are not. Sometimes out of fear to be judged or other times to impress someone. But while all these actions of pretending and manipulating themselves, they forget to be real.

Nobody realizes that some people expend tremendous energy merely to be normal.- Albert Camus

We all are in a dominating world. There is an old school mindset of judging others but gets furious when they are being judged back. Some people take it casually but some strive hard to pretend normal. In this dominating world, we should listen to each other’s opinions without being harsh. Might someone out there would be craving tremendously just to act normal.

My soul’s a burden to me, I’ve had enough of it. I’m eager to be in that country, where the sun kills every question. I don’t belong here.- Albert Camus

The soul always knows what to do to heal itself, the challenge is to silence the mind.We often fail in doing so.As a result, the soul has to bear the burden of our continuous questioning game.We just want to shift somewhere, where the powerful rays of the sun kills the toxic released from every question that our mind plays with.And make a happy place for the soul to reside.

We don’t have the time to completely be ourselves. We only have the room to be happy.- Albert Camus

To be beautiful means to be yourself. You don’t need to be accepted by others. You need to accept yourself. We spent half of our life, but compromising our wishes and seek acceptance from others. Despite the continuous cycle of acceptance and rejection, we make room to be happy with our constants.Therefore the author says we never completely accept ourselves, we just keep ourselves happy by keeping ourselves engaged doing the thing we love.

Some people talk in their sleep. Lecturers talk while other people sleep.- Albert Camus

Many people have the habit to talk in their sleep. This disorder is known as somniloquy. Here the person is unaware of his behavior. And speaks complicated monologues and gibberish. But when a lecture speaks, he is in all his senses and teaches his students with complete awareness. The student somehow may feel the lecture to be boring and nod in-between the session.

Autumn is a second spring when every leaf is a flower.- Albert Camus

To be happy, we must not be too concerned with others.- Albert Camus

The purpose of a writer is to keep civilization from destroying itself.- Albert Camus

I used to advertise my loyalty and I don’t believe there is a single person I loved that I didn’t eventually betray.- Albert Camus

At the heart of all beauty lies something inhuman.- Albert Camus

When the soul suffers too much, it develops a taste for misfortune.- Albert Camus

People hasten to judge in order not to be judged themselves.- Albert Camus

Real generosity toward the future lies in giving all to the present.- Albert Camus

There is but one truly serious philosophical problem and that is suicide.- Albert Camus

Without work, all life goes rotten. But when work is soulless, life stifles and dies.- Albert Camus

Only a philosophy of eternity, in the world today, could justify non-violence.- Albert Camus

The welfare of the people in particular has always been the alibi of tyrants.- Albert Camus

Those who lack the courage will always find a philosophy to justify it.- Albert Camus

Every act of rebellion expresses a nostalgia for innocence and an appeal to the essence of being.- Albert Camus

You may also like to read quotes of Oscar Wilde, Charles Bukowski, and Friedric Nietzsche as well.