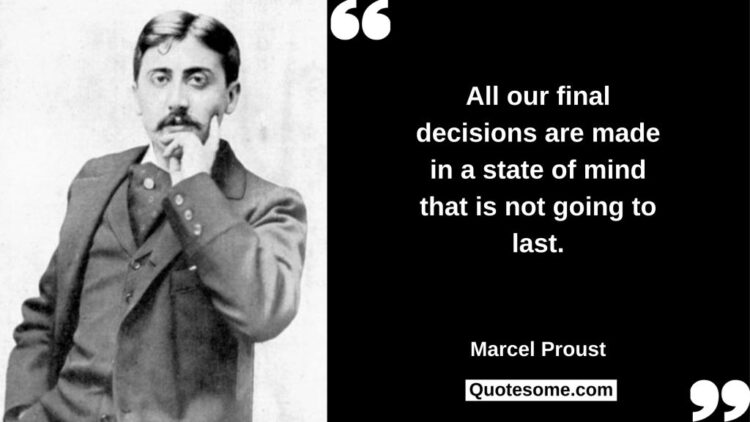 Marcel Proust is considered one of the greatest writers globally, a French writer in the early 20th century; he is responsible for writing the longest novel in the world, officially called: À la recherche du temps perdu or In Search of Lost Time.

It has more words in it than “War and Peace”. The book was published in French for over 14 years and in seven volumes. The novel isn’t written in the straight narrative sense. It describes people and places that embodying the whole philosophy of life.

His books tell one man’s story and his quest to achieve happiness in life through his various pursuits. He tries every worldly pleasure to get the ultimate happiness. The character eventually develops a search for the true purpose and meaning of life in the end. He recounts that in life, we should first and foremost appreciate our existence and grateful for what we have to be truly happy.

Your soul is a dark forest. But the trees are of a particular species, they are genealogical trees.- Marcel Proust

Happiness is beneficial for the body, but it is grief that develops the powers of the mind.- Marcel Proust

Time passes, and little by little everything that we have spoken in falsehood becomes true.- Marcel Proust

There are perhaps no days of our childhood we lived so fully as those we spent with a favorite book.- Marcel Proust

All our final decisions are made in a state of mind that is not going to last.- Marcel Proust

What a profound significance small things assume when the woman we love conceals them from us.- Marcel Proust

People can have many different kinds of pleasure. The real one is that for which they will forsake the others.- Marcel Proust

Those whose suffering is due to love are, as we say of certain invalids, their own physicians.- Marcel Proust

Our intonations contain our philosophy of life, what each of us is constantly telling himself about things.- Marcel Proust

People wish to learn to swim and at the same time to keep one foot on the ground.- Marcel Proust