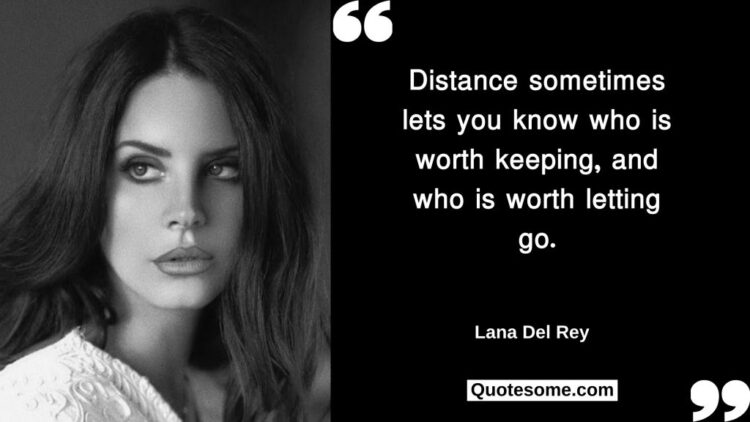 Elizabeth Wooldridge Grant is known by her stage name Lana Del Rey was born on June 21, 1985. She is a very successful American Singer-songwriter. Her music is known to have references from pop culture, especially the 50’s and the 60’s Americana.

His songs are often noted for glamour, tragic romance, cinematic quality, and melancholia. My favorite is the lead single “Young and Beautiful” from the movie “The Great Gatsby” (2013). As of 2020, her Vevo and YouTube pages have combined views of 4.1 billion.

She has sold over 13 million singles and 19.1 million albums worldwide. Her accolades include- nine GAFFA Awards, a Satellite Award, two MTV Europe Music Awards, two Brit Awards, a Golden Globe nomination, and six Grammy Award nominations. She suffered from anxiety and feeling of alienation in her teenage years.

Music was something that helped her reprieve her zest for life, and her lyrics signify that. A few lines into her songs, and you will resonate with those hauntingly powerful words that would touch your soul.

“Think I will miss you forever, like the star miss the sun in the morning sky” – Lana Del Ray

Morning star appears at the crack of dawn, in the absence of the sun, the brightest star that is the planet Venus shines the most. The author says that as the morning star misses the sun,she is going to miss the person who is currently not residing along with her or has been part of her, for the rest of her life.
It is said sometimes that missing someone is the heart way of reminding you that you still care for and love “ the someone “of your life.

“Sometimes love is not enough and the road gets tough. i don’t know why” – Lana Del Ray

Change is the sole permanent in this temporary world. Sometimes love is not enough to hold on to someone. sometimes we have to respect each other’s decisions and move on. Letting go of someone who once used to be your world is hard.
But holding on to the one just because you can’t survive is just portraying your selfish image. It’s better to let go of him/her .life doesn’t stop for you, not for anyone else. but there are those amazing moments that make you feel who you are. Don’t sit around crying.
Trust yourself!!
One-day you are going to be okay !!

“The world needs poetry now more than ever.it’s the only thing that can keep the music from copying itself and sounding the same.” – Lana Del Ray

Poetry is the literary art that has a quality of beauty and intensity of emotions.it has the power to capture the thoughts of the listener.
hus, the author says that this world needs more poems and poetries which has its style of manifestation of its beauty and also acts soothing the listener’s ears. Whereas the music is sounding the same nowadays without having their distinct originality.

“Money is the anthem, ofsuccess, so put on your mascara and your party dress” – Lana Del Ray

People always think the poor are in a more pensive mood than the rich. but richer the man, the more is his tension as he has to showcase in front of everyone that he is rich and for which he has to spend more money on himself and his status of living.
The above lines explain that to showcase your success, you have to spend more money. As money is the anthem of success.you have to maintain a lavish lifestyle and keep your style quotient up to the point that it is noticed by others.

“I’m tired of feeling like I’m fucking crazy. I’m tired of driving till I see stars in my eyes”- Lana Del Ray

When we are too tired of the day or the task we wait for the night to lay down and rest. The above lines explain the weariness of life that may be in a relationship or even if in a workplace that drives a person crazy and he becomes so desperate that he is unable to concentrate in his task .and he restively waits for the stars to appear in the sky so that he can rest for a while.

“Loving you forever can’t be wrong, even though you are not here, can’t move on” – Lana Del Ray

Moving on doesn’t always mean unloving someone just because you both cant stay together now.
Being together or got parted depends on fate, but loving someone has nothing to do with your fate. The author wants to convey a message to her beloved that even though you are not here, that doesn’t imply that I had stopped loving you. I still love and will keep doing it. Reciprocating the love I do to you is completely on you, but loving you without any expectations is my sole right and I don’t see anything wrong in it.

“Every time I close my eyes, it’s like a dark paradise.no one compares to you, but there’s no you, except in my dreams tonight”- Lana Del Ray

The author says that as she closes her eyes, it’s like a dark heavenly abode. No one is even comparable to you(the person she misses the most) nor even you are present there.
She says that the sole person whom he wants to see with her eyes awake, Comes only in her dreams.

Holding on too long and letting go too easily both prove to be harmful. Whether it’s in a relationship, work or a concert knowing when to leave is always a wise decision.
Sometimes in a relationship, we get addicted to people after spending so much quality time with them that the thought of surviving without them gives us goosebumps. but when you know that it’s not working well, then it’s advisable to distance yourself from the person for sometime .and as said earlier, what is meant to be, will always find its way to be. If it comes back to you, thenit’s worth keeping it .and if it doesn’t, then it’s worth letting go….

“We have nothing to lose, nothing  to gain, nothing we desired anymore-except to make our lives into a work of art” – Lana Del Ray

As per the sayings of Bhagwat Gita, we have nothing to lose, nothing to gain in the course of life. It’s our doings(karma) that’s gonna be with us till eternity.
So without being worried about the loss, gain, and unending desires, we should focus on our work and act diligently towards it, so that we can leave our footprints in the sand of time .and the upcoming generation remembers our work of art and feels proud of their forefathers.