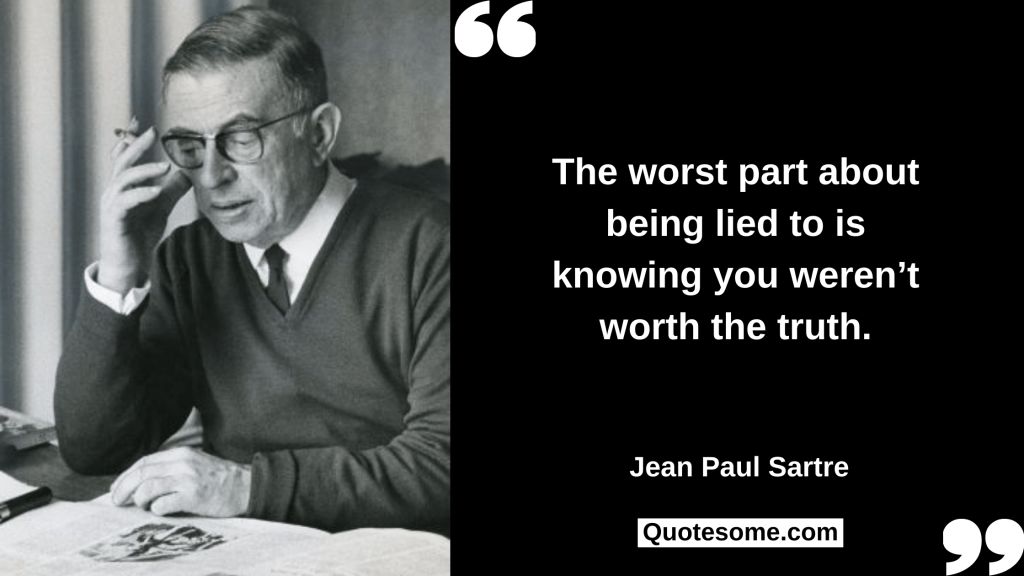 He was also known to be in an open relationship with fellow existentialist and prominent feminist Simone de Beauvoir. Together they challenged many social and cultural expectations and assumptions of their upbringing.

They considered the traditional lifestyle as bourgeois in thought and life as general.  His general theme of work represented an authentic way of living on one’s terms and dispelling conformity.

Some of his famous works are- Being, and Nothingness(L’Être et le Néant, 1943) and  Existentialism Is a Humanism (L’existentialisme est un humanisme, 1946); in 1964, he was awarded the Nobel Prize in Literature, which he initially declined because he thought that a writer should never be made into an institution.

I found the human heart empty and insipid everywhere except in books.- Jean Paul Sartre

As far as men go, it is not what they are that interests me, but what they can become.- Jean Paul Sartre

All human actions are equivalent and all are on principle doomed to failure.- Jean Paul Sartre

Every existing thing is born without reason, prolongs itself out of weakness, and dies by chance.- Jean Paul Sartre

There is only one day left, always starting over: It is given to us at dawn and taken away from us at dusk.- Jean Paul Sartre

That God does not exist, I cannot deny, That my whole being cries out for God I cannot forget.- Jean Paul Sartre

The worst part about being lied to is knowing you weren’t worth the truth.- Jean Paul Sartre

We do not know what we want and yet we are responsible for what we are – that is the fact.- Jean Paul Sartre

Life has no meaning a priori… It is up to you to give it a meaning, and value is nothing but the meaning that you choose.- Jean Paul Sartre

Three o’clock is always too late or too early for anything you want to do- Jean Paul Sartre.