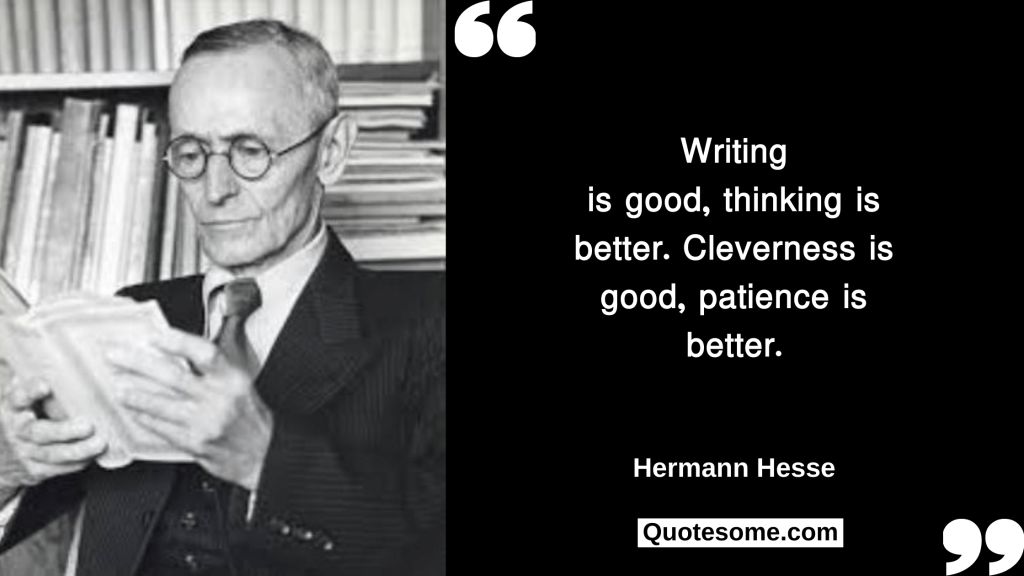 Hermann Karl Hesse was a German-born Swiss novelist, poet, and painter who lived from July 2, 1877 – August 9, 1962. Some of his best-known works are- The Glass Bead Game, Siddhartha, Steppenwolf, and Demian.

His works mainly concern with an individual’s search for spirituality, self-knowledge, and authenticity. He won the Nobel Prize in Literature in 1946. In the thirties, he made quite a controversial move by publicizing and reviewing banned Jewish authors like Franz Kafka. In the late ’30s, the Germans banned his books from getting published.

His last novel was The Glass Bead Game. He wrote many short stories throughout his life that were chiefly recollections of his childhood. His poems were themed on nature, and he even wrote several ironic essays. He also occupied himself with a steady stream of letters from his readers, whom he actively replied. His writings captured the people’s longing during those hard times of war for a new order and peace.

If you hate a person, you hate something in him that is part of yourself. What isn’t part of ourselves doesn’t disturb us.- Hermann Hesse

In each individual the spirit is made flesh, in each one the whole of creation suffers, in each one a Savior is crucified.- Hermann Hesse

Those who cannot think or take responsibility for themselves need, and clamor for, a leader.- Hermann Hesse

If a man has nothing to eat, fasting is the most intelligent thing he can do.- Hermann Hesse

It is possible for one never to transgress a single law and still be a bastard.- Hermann Hesse

Seeking means: to have a goal; but finding means: to be free, to be receptive, to have no goal.- Hermann Hesse

Some of us think holding on makes us strong but sometimes it is letting go.- Hermann Hesse